On May 25, 1975, the Republic of Togo issued a set of 4 stamps (2 regular, 2 airmail) depicting hunting scenes and are inscribed “CHASSE AU TOGO” (Hunting in Togo).

This set appeals to me, not because I am a hunter (I tried it once and that was enough), but the simplicity in design and what I feel is the clean look of the designs.   The only awkward design element is the lack of scale when you compare the animal sizes to the hunters.

The stamps were printed by lithography and are perforated 13 x 13½. 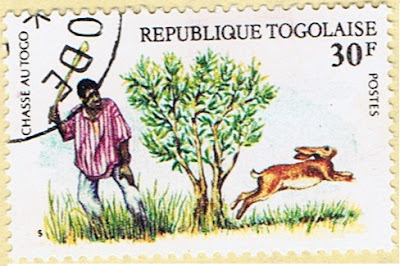 Each of the designs features a different type of animal and method of hunting.  The 30 Franc value shown above features a hunter using a club to hunt rabbit. 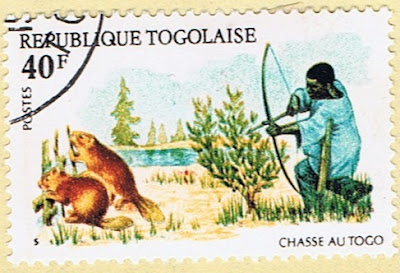 The 40 Franc value features a bow hunter, hunting beaver.  You can also see that the hunter seems to have a machete at his side. 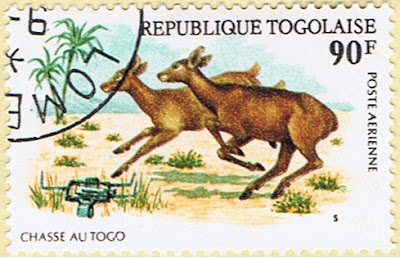 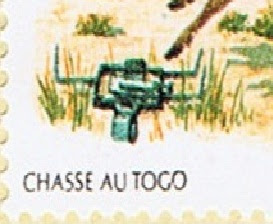 The first airmail stamp features a couple of deer.  Although no hunter is in the image, I believe the item near the lower left of the design is a type of foothold trap. 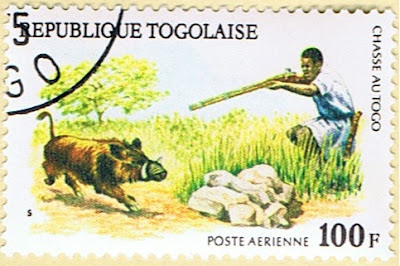 The final stamp in the set features wild boar hunting with a rifle or shotgun.

The International Quiet Sun Year (IQSY) was a cooperative international effort to study the effects of the sun during the quiet period of the 11-year solar activity cycle (Dec.  1964 – Dec.  1965).   The IQSY was organized by the International Council of Scientific Unions to study solar events that are easier to observe during periods of lower solar activity.  Observations were made using terrestrial observatories and various spacecraft.

To commemorate the IQSY, Togo issued a set of six stamps with three designs on December 12, 1964.  Common to each of the stamps is a stylized sun and a globe with lines of latitude and longitude.   Each of the three designs features different satellites.

The 10 and 45 Franc design features a Mariner Satellite and an orbiting geophysical observatory.   The Mariner program was run by NASA and used a series of Satellites to observe and explore the planets of our solar system, I believe that it is most likely Mariner 2 or 4 depicted on these stamps.  Mariner 2 and 3 are now in an Orbit around the sun.  The status of Mariner 4 is unknown as it was hit be several micrometeoroids.

The 15 and 25 Franc design features the Tiros and Telestar Satellite as well as an orbiting solar observatory.   The Tiros satellite was launched in April 1960 and was a weather satellite designed to take television images of weather patterns.  It was operational for 78 days.  Telestar was the first private satellite launched, It was a communication satellite and was used to test satellite communications over the Atlantic Ocean.

The 20 and 50 Franc design features the Nymbus, Syncom and Relay Satellites.  The nymbus(nimbus) program was designed by NASA and used for meteorological research.  The Syncom satellites were used telecommunications.  The one depicted on the stamps are either Syncom I, II or III.  The Relay satellites were designed and built by RCA.  They were experimental communication satellites, Relay I was the first satellite to provide television transmissions across the Pacific ocean.

The stamps were printed in Lithography and are perforated 14.