In 2008 the postal authority of Botswana issued a set of 5 stamps to commemorate the 40th anniversary of their national museum and art gallery.

The museum was established by an act of parliament in 1967 and is located in the Botswanan capital of Gaborone.  For the 40th anniversary, the museum mirrored the International Council of Museums banner of “Museum as Agents of Social Change and Development” 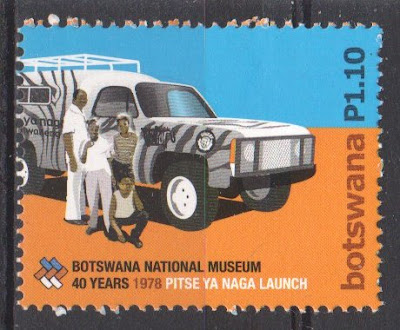 The first stamp in the set denominated 1.10 Pula depicts a Pitse Ya Naga Launch.  This ‘Zebra on Wheels’ is used for outreach to school children all over the country.  It brings the museum to the rural areas of the country providing instruction in Botswanan cultural heritage. 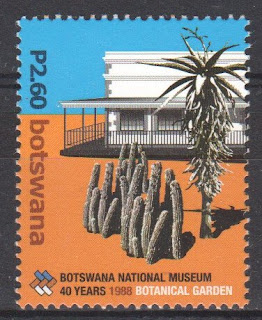 The next stamp in the set denominated 2.60 Pula featured a representation of the National Botanical Garden.

This garden is a 17-acre park located along the Notwane River.  It was opened in 2007 to protect Botswana’s heritage.

The garden is composed of six sections, one for each of the 6 ecological divisions within Botswana.  The park is also responsible for maintaining all botanical monuments throughout the country. 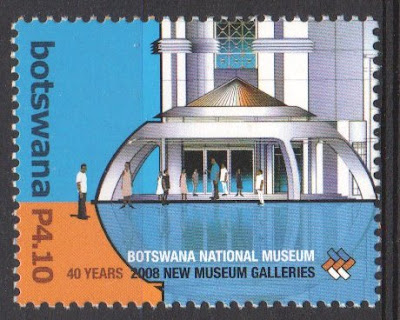 A depiction of the new museum galleries is featured on the 4.10 Pula stamp.

One of the main features of the art gallery is to feature the work of local artists.  Since 1975 the National Gallery has hosted various diverse exhibitions of art, crafts and photography 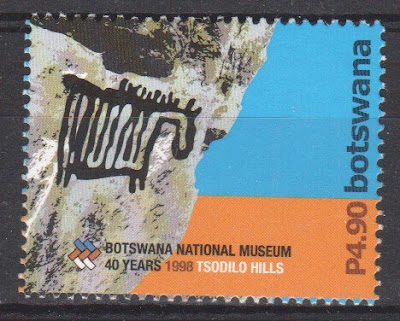 Created as a world heritage site in 2001 due to its religious and spiritual significance, UNESCO estimates that there are over 4,500 rock paintings on the site.

The site also consists of three main hills named: Child Hill, Female Hill and Male Hill.  These hills play a great significance in the earliest inhabitants of the area. 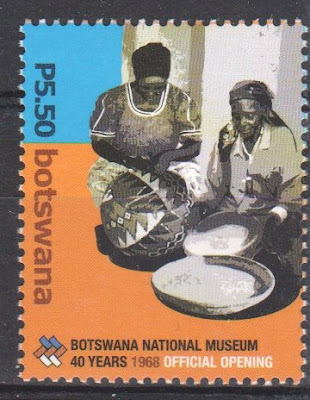 The last value in the set, 5.50 Pula represents the official opening of the Museum in 1968.  The stamp demonstrates local people participating in craft making.

The museum is also responsible for Tsholofelo Park which is where the remains of the “negro of Banyoles” is interred.  This body was returned from the Darder Museum of Banyoles in Spain and was a taxidermy sample of a San person from the region.