The Barbado’s issued the 35 cent HMS Barbados stamp on August 16th, 1994 as one of a set of fourteen ships stamps issued. 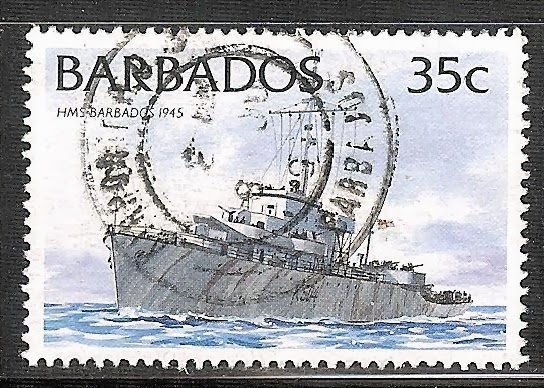 </div>
Originally ordered as a patrol gunboat by the US Navy as the USS Halsted, she was reclassified as a patrol frigate of the Tacoma class and laid down in May 1943 at the Walsh-Kaiser Company of Providence, Rhode Island. The ship was renamed HMS Barbados once it was intended to be transferred to the Royal Navy as a Colony class frigate. Launched on the 27th of August, 1943 she was officially transferred to the Royal Navy under a lend-lease agreement in December 1943.

In April 1946 the Barbados was returned to the US Navy and in 1947 she was sold for scrapping.